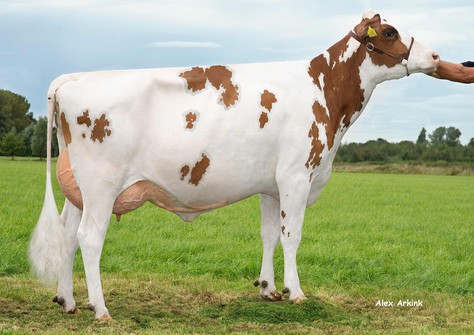 The classification of a group of first and second calvers at Hedra Holsteins (the Vernooij family) resulted in an average score of VG-85.4!

Hedra Remarlinda 1104, the second lactation Delta Lendor was re-scored with VG-87. In addition, she was awarded with an excellent score of EX-90 for her mammary. As her name suggests, she descends, via dam Delta Riana VG-89 & granddam Delta Riant VG-87, from Remarlinda EX-90 (s. Jocko). Riana VG-89 is the maternal-sister of proven sire Delta Bookem Danno. The well-known sire Delta Atlantic also hails from this line. 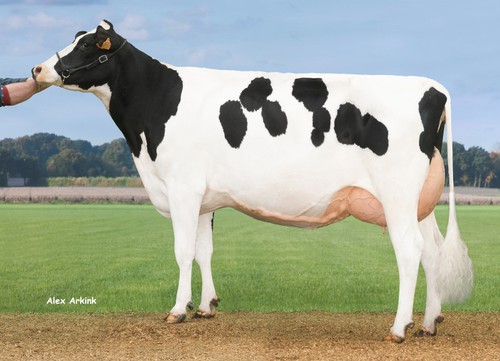 From the well-known Caudumer Lol 422 PP Red VG-85, dam of the high ranking young sires Delta Cartoon P Red, Delta Launch PP Red and Delta Louis P Red, a full sister of Louis P Red is housed at Vernooij: De Steeg Delta Lalita Red P. This Gywer RDC, which calved in March, scores 242 NVI with 1401 kgsM at the age of 2.5 yrs. In her 305-day lactation, this index is strongly reflected with an projected production of 11,054 kgsM with 3.54% fat and 3.30% protein! The classifier scored her VG-86 and VG-87 Frame.

An important bull dam for Hedra Holsteins at this moment is Hedra Froukje 1279. This 2-yr-old is sired by Delta Floris and is a member of the impressive Mars Froukje family. A Dutch cow family that has bred many AI bulls, including Delta Frontline and Mars Inseme Chapeau. From Froukje 1279 Vernooij bred the high scoring Hedra Froukje 1541 P RDC (by Launch PP Red) with 366 gNVI (4-2022), which was sold to CRV. Shortly thereafter, her Jawliner son also left to the AI facilities of CRV. Froukje 1279 was good for VG-86 (VG-88 FL) and has recently been photographed. This picture will follow soon.

A score of VG-86 was also given to Hedra Anne 1288 (by Floris) and her two full sisters Anne 1290 and Anne 1291, daughters of Hedra Anne 587 VG-86. Generations back in the pedigree we find the American Lylehaven Royalty Anne VG-87 (s. Royalty), a daughter of Yarsons Apollo Havn Amber VG-86, who is also the foundation behind the Dixie-Lee Aspen EX-92 branch! Royalty Anne stands at the foundation of various AI bulls such as Lylehaven Ambition and Lylehaven Chair Ambrose. 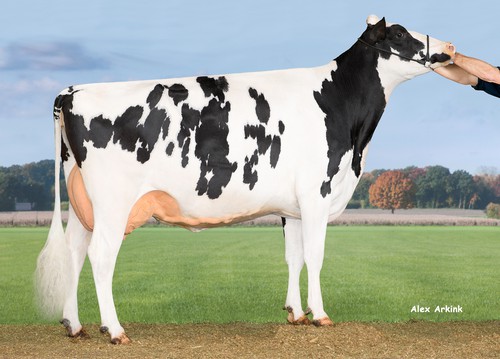