Bolleholster Adele claims the highest classification of first-calver
The list of first calved black and white cows, which scored the maximum classification of VG-89, included six animals. The Dutch Holstein breed's best first calver is Bolleholster Adele. She earned a maximum score of VG-89 on all linear traits. This Pitbull daughter from the Van Der Eijk family earlier this year stood in the European spotlights during the Championship in Librabont (Belgium): she won her class!

Besides Adele, also Maartje 200 (Goldwyn) from the Van Der Eijk family reached the toplist. This nine-year old lady has become a score of EX-92. In 2018 she won the Grand Championsip at the Landbouwshop at Opmeer. 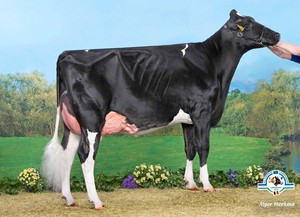 Red-and-White first calvers with maximum score
The list of young red and white cows which got the maximum score of 89, included four animals. Two of them belong to GenHotel members. The highest classication in The Netherlands belongs to Drouner DH Aiko 1445 VG-89 (s. Pat). Aiko 1445 is born and raised at the dairyfarm from Albring in Drouwenermond (Drouner Holsteins).  She became famous this year because of her second position, and best udder in her category at the European Holsteinshow in Libramont. After her debut at the European Championship she competed at the Dutch national show (NRM) and became Reserve-Champion!

NRM Champion of the young cows turned out to be Barendonk Massia 7273 (s. Agent) . She is owned by the family Hermanussen (Barendonk Holseins). Also Massia 7273 got the maximum score of VG-89! 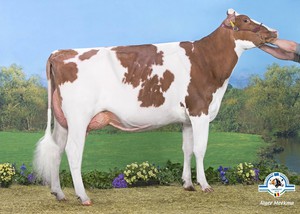 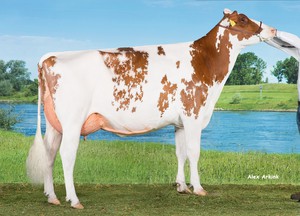 A summary of the annual statistics of Genhotel members