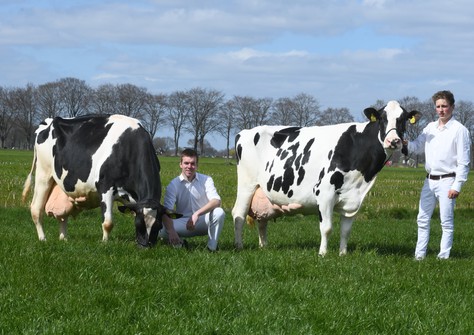 A fantastic achievement for the Knoef family of Big Holsteins, where this month no less than the 90th dairy cow has exceeded the lifetime production of 100,000 kgs of milk. There are not many dairy farmers in the Netherlands that manage to retain the longevity of their cows as they do at Big Holsteins!

The year 2021 is far from over and yet 8 cows from Big Holsteins have already been added to the - already long list - of 100,000 kgs milk lifetime cows this year. The 90th cow on this list is 9-year-old Kylian daughter Big Boukje 307 RDC VG-85, which was bred out of an EX-90 Lord Lily. Both Boukje 307 RDC VG-85 her dam and great-granddam also reached this same milestone. Her daughter Big Boukje 343 Red EX-91 (s. Red Rocks Mason RDC) is working hard to follow in Boukje 307 RDC her footsteps with a current life time production of 47,844 kgsM, 4.22% fat and 3.75% protein. This while she's working on her third lactation. The Mason RDC-daughter became known after her victory during the Wintershow Zwolle in 2019, where she won the Red and White Grand Championship. 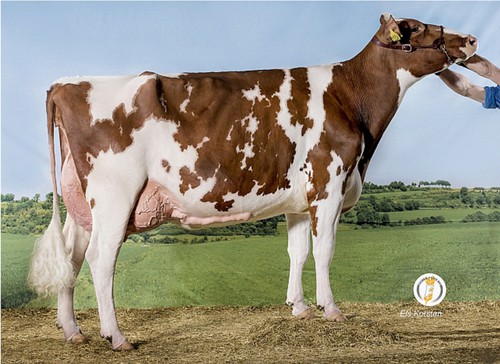 Right now, Knoef's herd contains 167 dairy cows that are on average 4.10 years old and achieve a 305-day lactation of 12,083 kgs of milk with 4.51% fat and 3.50% protein. In recent years, this Dutch dairy farm has also supplied several bulls to AI's, such as Big Redbone, Big Mindset, Big Kofu and Big Macht.