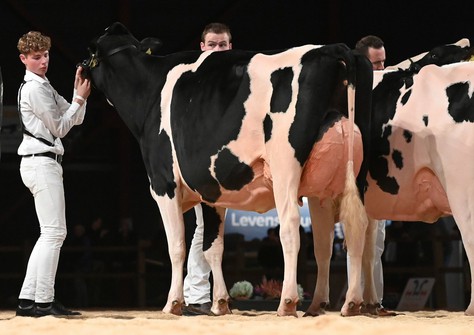 Charity 16 at the Holland Holstein sHow 2022

2022 Was the year for Charity 16! The very fancy Our-Favorite Undenied, owned by Neppelenbroek and Koevar Holsteins, appeared several times in the spotlights this year. However, the second calver Brookview Tony Charity EX-97 offspring managed to hit an extra milestone after several show successes!

The beautiful Charity 16 managed to freshen for the second time last May after a long first lactation. This was just in time to enter the 2022 show season. In the summer she took the titles Grand Champion and Best Udder at the Veekeuring Balk 2022, so owners Neppelenbroek and Hendriks prepared her for the open Dutch National Show in November: the Holland Holstein sHow. The Undenied, projected at 12,032 kgsM, managed to place 2nd in her Intermediate Class, just behind the later Reserve Intermediate Champion Bolleholster Solo Mae.

As a 2-yr-old, the Charity EX-97 descendant was already awarded with a maximum score of VG-89! After her wonderful show year, the time came to have the now four-year-old Undenied re-classified. This resulted in a true highlight for her breeders and owners with: 91FR 92DS 92MS 90FL TOT EX-91. This makes Charity 16 EX-91 also the first excellent scored Undenied of both Flanders and the Netherlands!