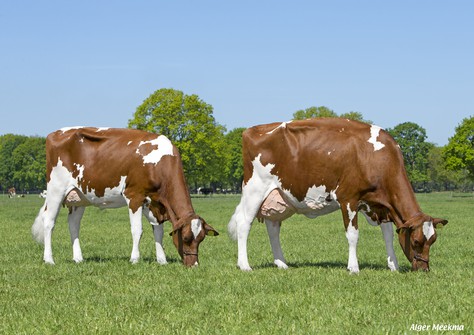 The talented Massia family of Red Rocks Holsteins has already reached many milestones within the Red Holstein population. Two recently photographed Massias let us snow how this cow family marks.

Mr Sunview Coin Sunfish RDC daughter Red Rocks Massia 128 Red represents the Massia family in a wonderful way. The third calver was rewarded with a total score of VG-86 as a two year old, but probably needs to see a classsifier again. Her fantastic dairy strenght shows her wonderfull ability to produce lots of milk. Massa 128 Red VG-86 is in her third lactation, which she started at an age of 4.03. This third lactation is predicted at 13,225kgM with 4.88%f and 3.59%p, being 22% above the herd average! 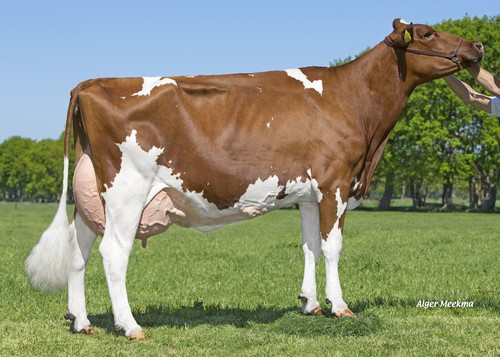 Three full sisters from Massia 128 Red VG-86 were born out of a flush with sire Wisent RF. On average, these sisters produce 9,747kgM with good components in just 305 days. They combine this with an average score of VG-85.7! The Wisent RF daughter who stands out the most is Red Rocks Massia 155 Red. When it comes to comformation, she manages to match her dam with VG-86 AV/2YR. In addition, the similarities between dam and daughter are also visibly present!

Red Rocks Massia 155 Red VG-86 has been flushed several times because of her super high NVI and RZG. This resulted in several high progeny, the highest one is a 303 NVI and 154 RZG heifer calf:  Red Rocks Massia 208 Red (s. Gywer RDC) 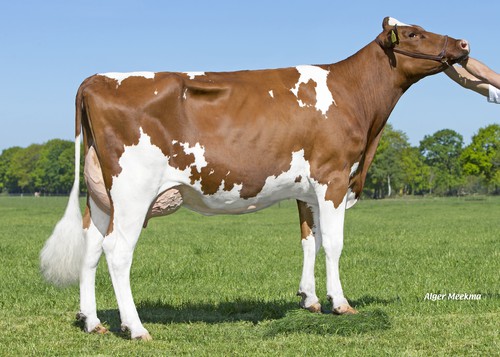