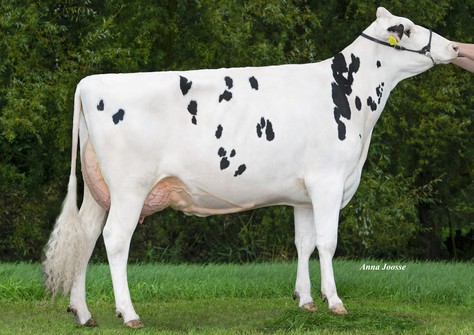 The first calver Dykster K&L SD Carry, is a Mirabell Sound System daughter out of the Koepon Classy family. With a classification score of VG-88 she's the highest scored Sound System daughter in the Netherlands. The beautifully Carry VG-88 is a result of the 3STAR Genetics Breeding Program and is jointly owned by Dykster Holsteins.

Dykster K&L SD Carry VG-88 had the honor to participate in the Video Contest CowValley 2020. In a heavy 2-yr-old class, this Koepon Classy descendant managed to show all of her great assets. Carry VG-88 won the Junior Championship by the length in her frame and the length and width of her rump, great feet & legs and especially her fantastic mammary. The fact that her mammary is her best part was already proven during the last classification day. Carry VG-88 received namely a maximum score of VG-89 for her beautiful mammary.