The KHW Goldwyn Aiko RDC EX-91 / Kamps-Hollow Durham Altitude RDC EX-95 family has grown in popularity and numbers in the Netherlands in recent years. While the Albring family has been milking about 30 Aiko's with pleasure, offspring from this special cow family is also part of the 3STAR Breeding program now.

Recently the Veeteelt magazine published a nice report about the Aiko family at Drouner Holsteins. The purchase of embryos from KHW Goldwyn Aiko RDC EX-91 resulted in Drouner AJDH Aiko RDC VG-87 (s. Freddie), the start of a new and successful line in the Drouner herd. This branch of the Aiko family is strong in conformation, production ánd index breeding!

There are plenty of beautiful examples of the type quality of the Aiko's, like Drouner Aiko 1349 EX-90 (s. Effort). She was named Reserve Intermediate Champion R&W at the HHH Show 2019. Pat-Red daughter Drouner DH Aiko 1445 VG-89 took second place and the best udder in her class at the All-European Holstein Show in Libramont. 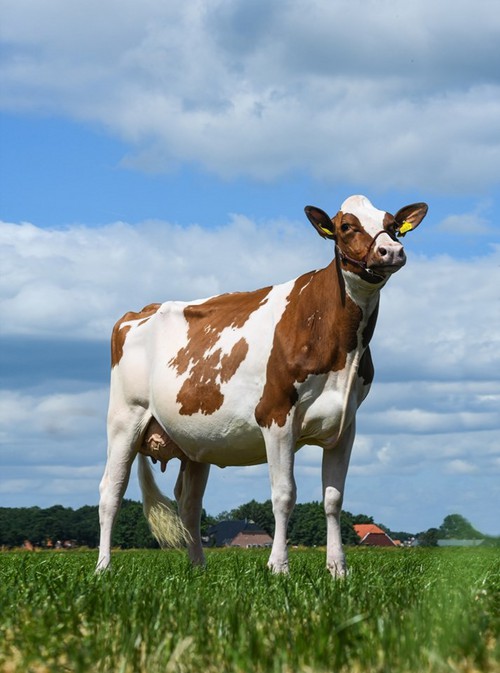 Also from 3STAR Genetics the interest grew for this cow family, especially after seeing the fantastic Drouner AJDH Aiko 1267 P-Red EX-90 (s. Kanu P) as  a young heifer. 3STAR Genetics then managed to buy in and became co-owner of Aiko 1267 P-Red EX-90. Years later, this turned out to be a great choice, because in 2017 she became Reserve Intermediate Champion & HM Grand Champion HHH-Show 2017. This Kanu-P daughter also delivered several sons to AI, like Drouner Ahoy Pp and Drouner K&L Aiki P Red. At Drouner Holsteins are now ten dairy cows from the Aiko family that are jointly owned with 3STAR Genetics. Nine of these Aiko's are classified, with a whopping average of VG-86.9! In addition, 3STAR Genetics also invested in offspring of KHW Super Aderyn RC EX-90. From this maternal line several daughters are born and they are bred together with Willsbro Holsteins. From this R&W line, many embryos are sold through the Embryo Program. One of these descendants is K&L GT Aderyn Red GP-84 (s. Great-Red) of the Poppe family. She is a great-granddaughter of KHW Super Aderyn RC EX-90.

This Great-Red daughter from the famous bull dam Willsbro K&L Nugget Aderyn RDC VG-86 was successfully flushed several times as a heifer and produced more than 20 offspring which score well on both NVI and RZG basis. Meanwhile, Aderyn Red GP-84 almost finishes her first lactation and she does so in a way that her maternal line is known for, namely with a very high fat and protein percentage: 9,790 kgM with 5.11%f and 4.16%p. 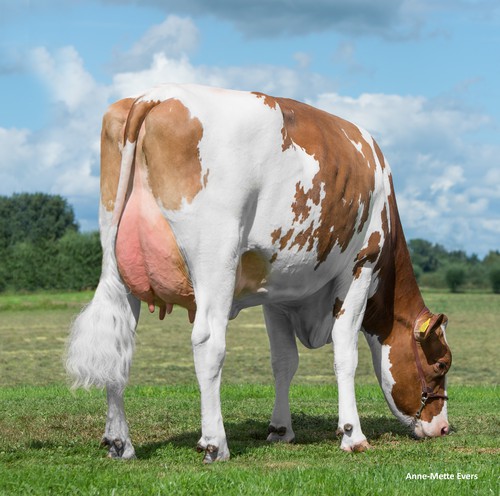 Are you interested in the Goldwyn Aiko/Durham Altitude family too?
Please contact GenHotel and we can give you the unique opportunity to breed your own Aiko!