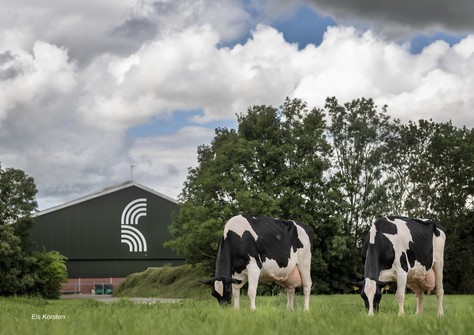 The Koepon dairy farm has not one, but two new cows in their herd which produced over a lifetime production of 100,000 kgs milk recently. Not entirely surprisingly, both cows come from the beloved Koepon Classy family. This deep cow family guarantees longevity, milk production and conformation! In addition, the Classy family also manages to deliver quality on paper, because many tested descendants from this cow family also score a high genomic index. Her relative Koepon Snow Classy 97 RF VG-85, a Flevo Genetics Snowman daughter, completes the picture. Although Classy 97 VG-85 is only in her 6th lactation, she too managed to reach the fantastic 100,000 kgsM barrier. This vital lady manages to lift the level considerably with an average lactation of 16.747 kgsM with 4.13%f and 3.39%p. This Snowman daughter at Koepon was of extra interest for AI-studs, because she's a redcarrier, so she was flushed with sires like Schreur Apoll P Red and Holbra Applejax RF. One of her most influential daughters is sired by Val-Bisson Doorman: Koepon Door Classy 161 GP-84. The milk production of Classy 161, like her dam, is also phenomenal and she's produced already 64,668 kgs in just four lactations. Due to her high genomic level for NVI, TPI and RZG, flushes were done with mating sires such as Mogul, AltaSpring and Rubicon. EDG Rubicon was the sire that deliverd amazing work in terms of components, mammary and dairy strength. This is clearly reflected in Classy 161 GP-84 her daughter Koepon Rubi Classy 267.