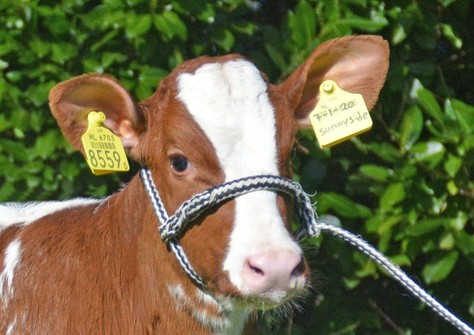 Very prominent in the top 20 gTPI is Koepon Genetics with 8 red & white and 2 red carrier daughters of Lakeside UPS Red Range Red, the "Giant Red Genomics Transmitter" out of the Golden-Oaks Mark Prudence EX-95 family. Red Range is in the top 20 Red Holstein as well, just like her her Rubels-Red daughter at De Oosterhof & 3STAR Genetics.

With 6 red carrier daughters Wilder Kosmo RDC is also frequently present in the top 20 red carriers. Four of the six daughters are sired by Fustead S-S-I Solution, including the number 2 gTPI red carrier in Europe Wilder Kasimio RDC (2770 gTPI). Kosmo RDC is a Mr Salvatore RDC from the renown Wilder Kanu RDC family, owned by the Holtkamp family in Germany.

On the sire side there is a lot of variation, although the influence of Salvatore RDC in the top red breeding is unmistakeable. Through his sons (like AltaAltuve RDC, Ronald RDC, Solitair P Red and Shimmer RDC) or as maternal grandsire he is in the pedigrees of both top 20 rankings. Remarkable is also the name of EDG Rubicon, mentioned quite often as maternal grandgrandsire, but also in the pedigree of sires as Rubels-Red, Solution and Shimmer RDC.

* These overviews have been compiled with the utmost care, with official genomic results known to us. If animals are missing from these lists, please let us know and they will be added after all.