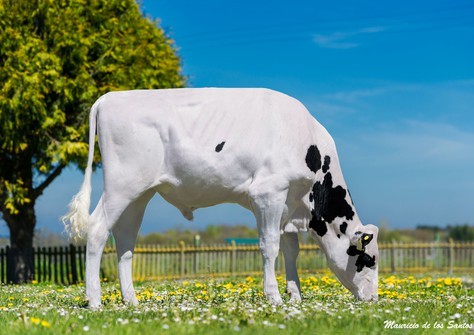 The Summer proof run in Spain has generated a new rank leader: K&L OH Rossi GUAY. Guay is a Boldi V Gymnast son with 5179 gICO and by far the highest genomic young sire in the Spanish system, almost 200 points gICO over the number 2. He transmits a high milkproduction with positive components, very favorable health traits and is one of the few bulls in the top 50 gICO with +2.00 for both udder, feet & legs and total score. Also in the German system Guay ranks with 161 gRZG (and 137 gRZE) in the top 15 and belongs to the highest Gymnast sons.

Guay is imported as an embryo from US through GenHotel, born at GenHotel member De Oosterhof and delivered to the Spanish AI-stud Xenetica Fontao. His full sister, K&L OH Rozella, is the number 1 gTPI Boldi Gymnast daughter globally and scores well in Germany and The Netherlands too.

Check the actual embryo offer at GenHotel EmbryoSale and invest now in your future topper! Whittier-Farms Outside Roz EX-95 (s. Outside), 5th dam of Guay