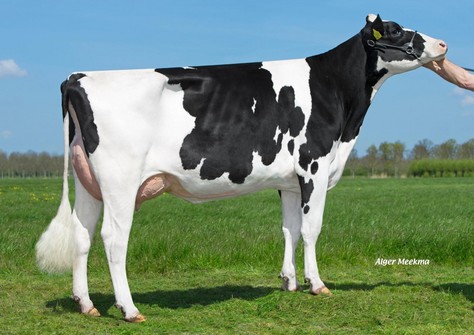 It was time for a classification at Hedra Holsteins. Thirteen heifers were scored by the classifier. Highlight of the day was Weelder Esperanto daughter Hedra Jessi 1015 with VG-87!

Hedra Jessi 1015, the 2-yr-old heifer scored VG-87, is a granddaughter of Hedra Delta Jessi 477 VG-89 (s. Snowfever), who was classified as a heifer with a maximum score of VG-89. Jessi 105 VG-87 (s. Esperanto) impresses with her well-balanced frame and super the feet & legs. She decends from a deep German/American cow family, from which the German brood cow WEH Jessica VG-88 (s. Laudan)  and proven sires as Roylane Socra Robust, Westenrade AltaSpring, S-S-I Montross Jedi and Plain-Knoll King Royal also descend. The red and whites managed to perform well in the mostly black-fur company. Hedra Alumette 1023 Red (s. Rody-Red) scored a nice VG-86. In Alumette 1023 Red VG-86 her pedigree you will only find females which are scored VG or EX. For example, the matriarch of this line is the Belgian Suzan EX-91 (s. Stadel). This Aalshorst Rody-Red-daughter of Hedra Holsteins is a half sister of the home-bred proven sire Hedra Allround-Red. 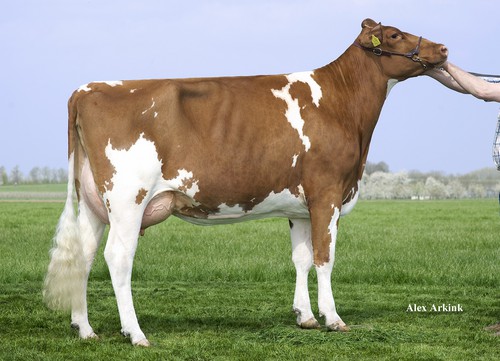 The thirteen classified heifers scored an average total score of 84.4.