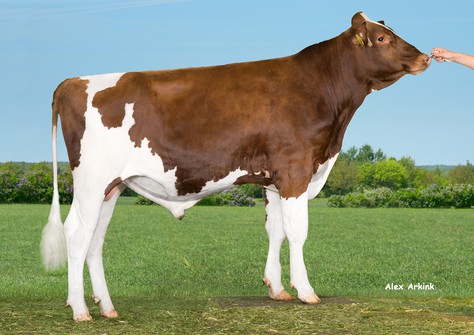 Many people know Drouner Dh Aiko 1445 VG-89 because of her great performance at the Europese Show (2nd in her class and best udder) or from her performance at the Dutch National Show NRM (reserve Junior Champion). But the German AI VOST already bought a son of her more a year ago!

Aiko 1445 was flushed as a heifer with Born P RDC and from the flush the Red bull Drouner Biko was born. This bull was tested through GenHotel in Germany on genomics and sold to VOST!

Biko is a great bull himself and looks a lot like his dam, granddam and other familymembers! His index is also as we could expect: Great type, tremendous udders and high milk with high protein!

Click here for more info on the index of Biko

Biko semen will be sold by VOST and outside Germany by GGI.