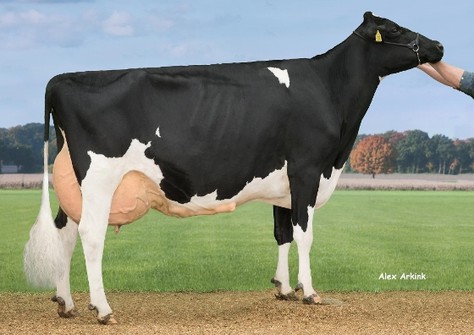 The highlight this classification was Hedra Alumette 600 RDC. This Red Carrier Whatsapp daughter is classified VG-88 (88 FR  88 DS  87 MS  89 FL). Her dam is the famous JK Eder Delta Alana RDC EX-90. Alana is a Mascol daughter of Alumette VG-89 (Lightning x Suzan EX-91) and she is a great broodcow for Hedra Holsteins. She is, for example, the dam to Hedra Delta Alumette 4-Red VG-87, the Jerudo dam to Hedra Allround-Red (s. Chanel) @ CRV. Alana is still present at Hedra Holsteins and her lifetime production is already over 115.000 kg of milk!

Two daughters of Delta Regard are classified VG-87. Hedra Jessi 630 VG-87 is a Regard daughter of Hedra Delta Jessi 477. Jessi 477 is a Snowfever daughter who is classified with the maximum score of VG-89 as a 2-Yr Old and her pedigree goes back at the famous German Laudan daughter WEH Jessica VG-88. Hedra Remarlinda 691 is the other VG-87 classified Regard daughter. Her dam, Delta Ria VG-88, is an Epic daughter of Delta Riant VG-87 (Bolton x Etazon Renate VG-86) and that makes her a full sister to the bull Delta Saxobeat and a half-sister to Delta Bookem Danno (s. Bookem).
A third Regard daughter, Hedra Remarlinda 694 P, is classified VG-86. The pedigree of this Polled Regard goes via an VG-86 Snowfever and a VG-86 Magna P also back at Etazon Renate VG-86.