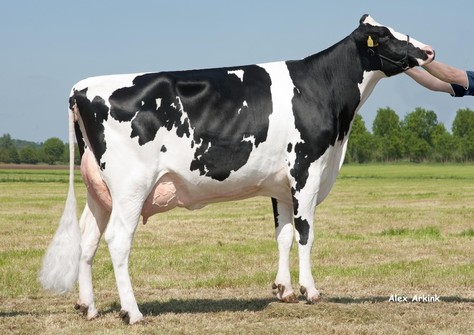 Very good results during herd classification at Hedra Holsteins this week. 14 2-Yr Olds where classified with 85.4 points with 86 point for F&L. The herdaverage at Hedra is now up to 85 points over 101 classified cows.

The highest classified cow this round was Delta Ria, an Epic daughter of Delta Riant VG-87 (Bolton x Etazon Renate VG-86). Ria, who also showed at the NRM in the themegroup with CRV-bulldams, is classified VG-88 in her 3rd lactation. A Cupido daughter of Ria, Remarlinda 526, was with VG-87 one of the highest classified 2-Yr Olds. Ria is a half-sister to Delta Bookem Danno, This Bookem son of Riant is still the #1 proven bull in the Netherlands.

Delta Rora is also classified VG-87. This 2nd lactation G-Force daughter is projected at 11.681 kg of milk with 3.50% protein and has at least 10 daughters sired by Finder (4x), Brentano (3x), Ibiza (2x) and Danno (1x) with over +300 GNVI. One of her Finder daughters is the current #7 in the Netherlands with +388 GNVI.
The dam to Rora is Delta Robyn VG-85, a Gibor daughter. This pedigree goes via daughters of Shottle and Dustin back at Veneriete Ugela Sasta VG-86, a Ugela Bell daughter of Etazon Hyde VG-86.