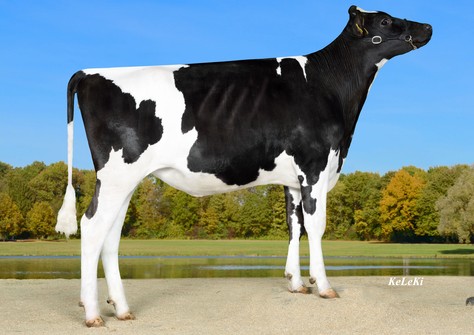 Wilder Mond, a promising Superhot daughter from the Wilder Meta family, is sold through the German Selection Sale to Koepon Genetics. She is flushed several times and not without success. A lot of embryos of Mond where sold and she now has interesting daughters owned by several GenHotel members. Her breeder, Wilder Holsteins, owns for example daughters by Lighter (> +150 GRZG) and Modetsy (> +2600 GTPI).

Owned by K&L is K&L MS Moni P, a Polled Mission P daughter of Mond. She scores +166 GRZG on German basis and +321 GNVI in the Netherlands. Herewith she is among the highest Polled heifers in both Germany and the Netherlands.

Wilder Moncherry is owned by Bouw Holsteins. This Kerrigan daughter scores +157 GRZG / +2638 GTPI. She is very allround and offers a lot of milk, very good health traits and excellent type.

At Schuit Holsteins you will find Wilder Movie (Kerrigan), a full sister to Moncherry. Movie scores +160 GRZG and +2629 GTPI. She has a huge production index, high longevity and very good type.

Wilder Mond. Remember the name because we will definitely here more about her in the future!