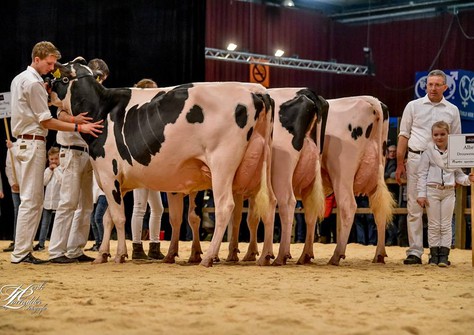 At Drouner Holsteins, owned by the Albring family, recently 15 two-yr-olds are classified with VG-85.9 on average. For two second calvers it was time to meet the classifier for the second time to get a lovely upgrade!

Not one, not two, but three 2-yr-olds were classified with a VG-88 total score, including the fancy Wilder Born P RDC-daughter Drouner Aiko 1591 P Red. She's a granddaughter of the Olympian Drouner AJDH Aiko 1288 Red EX-90. Aiko 1591 P Red VG-88 was one of the highest polled R&W heifers on NVI basis at the time and tested also great on RZG. Now it's her daughter Drouner Aiko 1796 P Red (s. Koepon AltaTop-Red) which outshines with 156 gRZG. 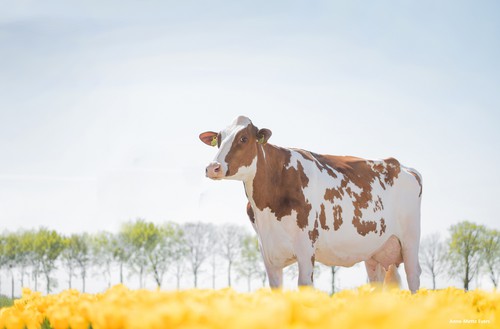 One of the first Dutch milking Woodcrest King Doc daughters and VG-88 classified belongs to Albring. She's named Drouner Cosco 1627 VG-88 and got a maximum score of VG-89 for her beautiful frame! Her dam Drouner AJDH Gold Cosco VG-89 - maternal sister to multiple show winner Drouner AJDH Cosmo EX-91 - turns out to be a wonderful brood cow! Not only Cosco 1627 VG-88, but also her oldest daughter by Defender was classified VG-88 2-yr-old too! The Albring family is a succesfull participant in the 3STAR Breeding Program. A result of the collaboration between Drouner Holsteins and GenHotel is Drouner K&L Classy 1630, a Bomaz Skywalker from Drouner K&L Classy VG-87. Classy 1630 was awarded with VG-88 and has a very beautiful VG-89 (max.) scored mammary. This VG-88 Skywalker produces stunning components: 5.04% fat and 3.65% protein. At the end, a stunning number of 10 cows were classified with VG-86 or more! You find an overview below: