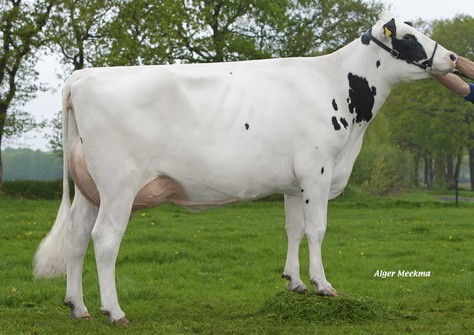 At Red Rocks Holsteins, from the Wesselink family, recently the classifier saw some great cows, with scores up to VG-88.

From the great Veenhuizer Zadia cowfamily is Zora RDC. She is now in 3rd lactationand was classified VG-87 with VG-88-MS. Zora, sired by Aikman,  her first daughters are in milk and an early one, Zora 4 (s. Akyol) got VG-85.

Red Rocks Ebony RF (v. Brekan), who is just fresh for a month was classified VG-85 and VG on all parts. she is a member of the Zandenburger Ebony cowfamily. Ebony was delivered to Red Rocks as an embryos by GenHotel. Ebony RF has a Goal son that belongs to the highest bulls worldwide, Red Rocks Goalgetter is been sold to RSH Gremany and has no less than +163 RZG!

As you see: at Red Rocks the best cowfamilies are represented and they all "Rock"!

table: all females with VG-85 or higher